Celebrate being
part of the family

Chances are that you are already driving around a car with Continental parts in it. Because car manufacturers in Europe trust our products so much, they use Continental tyres for every third new car in more than 800 models. This makes us the preferred choice of car manufacturers and places us well ahead of all our competitors. No matter the make of your new car, whether you switch from a small car to a family van, or finally take delivery of your dream car, the manufacturers know: Continental tyres stand for reliable safety.

Getting there was not an easy path: it takes an average of four years from concept study to one of our tyres being mounted on a new car made by an international manufacturer. During this time, we develop a tyre that is best-suited for the car model and the market where it is released and then subject it to around 100 internal tests. Car buyers ultimately want tyres of the highest quality and, above all, highest safety that last as long as possible and let them enjoy their new car for a long time.

Take a look at a modern car and you see a perfectly integrated concept, tyres included. The right set of tyres ensures that a car’s performance on paper is actually transferred onto the road. Gaining OE supplier approval from automakers indicates the exceptional quality of a product. Given the ever-increasing demands on new car models and the unstoppable technological development, however, developers are facing ever greater challenges, which – to complicate matters – also vary between countries and manufacturers.  Ulrich Mertin, Senior Vice President Key Account Management EMEA Business Unit OE PLT Tyres at Continental, explains the importance and challenges of OE tyre development.

OE tyre development is a highly demanding business. At what stage of developing a car do manufacturers typically get in touch with Continental?

Let me put it this way: when we receive an inquiry, we typically have between three and four years to develop the ideal tyre for a new car model. But right now, for example, we have inquiries about projects that have to be finalised in two years’ time. These extended deadlines allow us to meet the requirements more than adequately. In the best case, though, we would of course become involved in the concept stage of a new car development. And while that may not be the norm, it does happen.

What are the key performance characteristics that an automaker expects a tyre manufacturer to deliver?

It differs from one country to the next and indeed from one automaker to the next. Generally speaking, the core requirements primarily relate to safety, and to reducing rolling resistance, noise levels in the cabin and exterior noise – all without compromising on safety. The requirements also change over time, especially with new technologies.  Back in the 1980s, for example, rolling resistance and fuel consumption played a relatively subordinate role, but that has changed fundamentally with the rise (and demands) of electric mobility. All in all, pushing the limits in every direction is the mission at hand.

How do you ensure that a newly developed OE tyre meets the high expectations of car manufacturers?

We run countless tests at the end of the development process, first in the labs and then out on the track. OE tyres in particular are subjected to comprehensive testing. The goal is to exceed our performance targets, be it for noise generation, deceleration or rolling resistance. Tests under lab conditions are followed by test drives under real-life conditions on our test tracks. Each team has its own test drivers to handle this task and evaluate if a newly developed tyre also works well on the road.

Be part of the world's largest community - with Continental OE tyres

Taking delivery of a new car? Original Equipment tyres play an integral role in achieving a comfort and performance capabilities desired for a car, and greatly influences the driver's overall satisfaction with the vehicle. Most importantly, they guarantee safe journeys for you and your family. 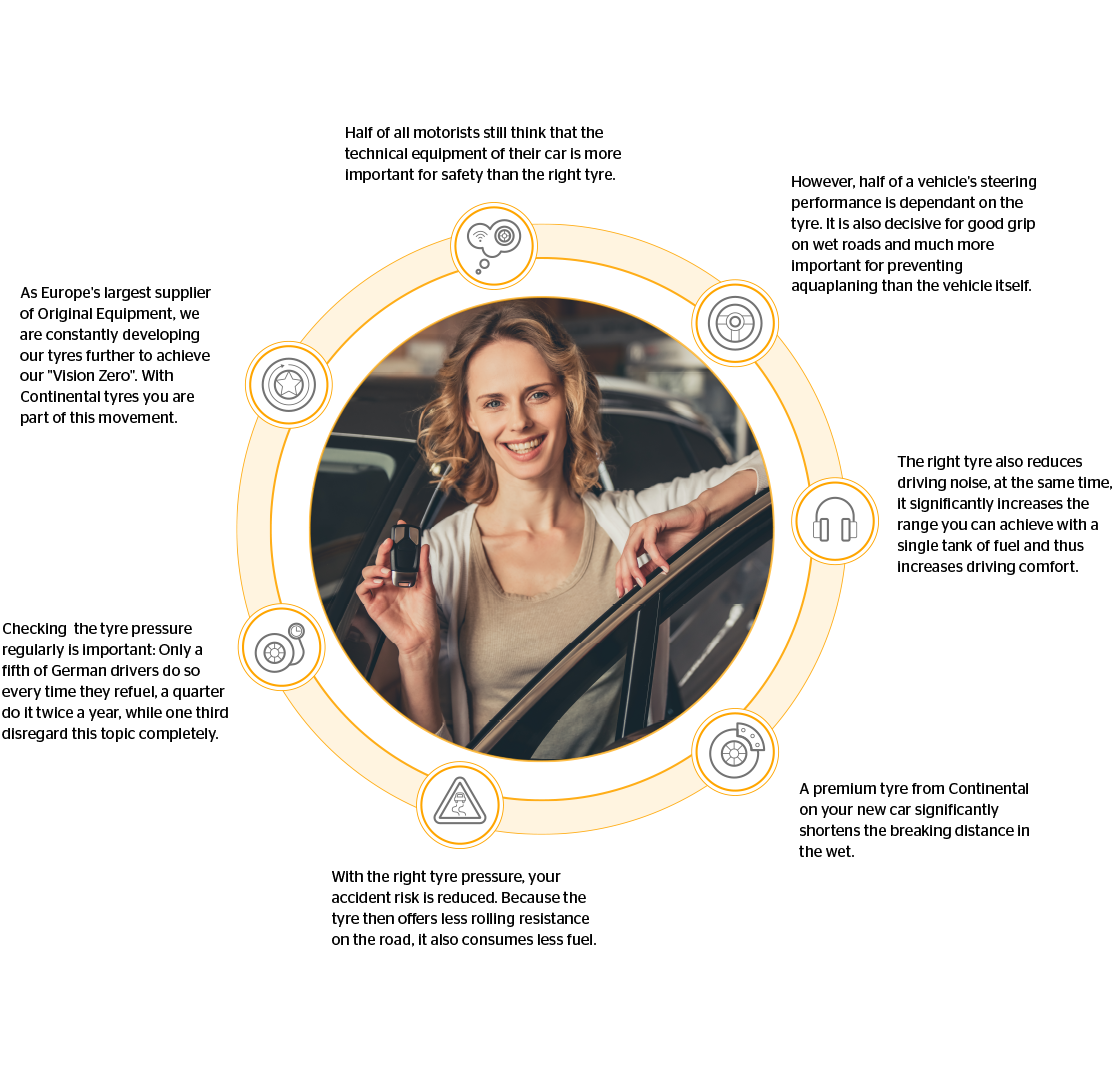 From autonomous driving to e-mobility to sustainability, discover how Continental goes beyond tyres and helps shape the landscape for our future cars.

German engineers are famous for diligence, precision and efficiency, the same values that stand behind Continental's past and present innovations.

Continental tyres regularly score top ratings in independent tests all over the world; confirmed quality for a safe driving experience in all conditions.

The fastest way to the perfect tyre.
Select tyre size or Show results
Continental in numbers